Today is the first day after the first New Moon of the first month of the year 2018. Happy New Year!! January’s first New Moon was yesterday. This day, to many, is the first official day to the start off a new year. Ok. This may not be an altogether popular concept in our a Gregorian calendar thinking culture, but celebrating a new year on a Lunar or Soli-lunar cycle (defined next) is a long-held practice going on today in over 20 countries across Asia, Oceania, and Australia. It marks a means of beginning cycles based on solar- lunar and planetary  events, along with seasons and harvest cycles.

What is a Lunar Year? An entirely Lunar-based calendar is based on monthly cycles, is not linked to solar events, and can vary between 12-14 months long. Countries who followed that system historically included most East Asian countries: Japan before 1873, China, Korea, Vietnam, Mongolia, and Tibet. Their new year demarcation fell between January and February, (i.e. Losar of Tibet this year is on Feb. 16-18.)

A Soli-Lunar calendar (as this post and today is about) is based also on lunar moon cycles. These cycles are synced with the sun, and with the addition of a periodically added additional month.

I’m not sure about you- but how our current mainstream culture celebrates a new year falls far short of what I actually need. Dedicating one day or even a long (hungover?) weekend to celebrating such an important event as a New Year is, well, kinda sad. Why? Because at least in this western culture, we are overlooking so many rich aspects of honoring an annual cycle. A new year is a huge turning point! Or it should be.

The celebration of a New Year should happen several ways over several months, because considering so many aspects of a 12-month cycle should take time. In addition to the celebration aspect of “Woo-hoo! Hey- we made it!”, there are the more thought filled questions: Where we were 1 year ago? Where am I headed?

Lunar time frames offer rich opportunities to cultivate new rituals timed with the moon’s cycles- not only to renew and start fresh, but to Honor what has transpired, consider thoughtfully the difficulties of the previous year, and energetically do something about it to clear and cleanse residual debris from our Mind*Body*Spirit, all with the help of the Lunar phases. Key New moon rituals help us to make space to invite what we wish to create. This is so much! How can any of us fit all of this into a short weekend? For me the answer is easy; I can’t so I don’t. I take my sweet time celebrating a New Year over the Soli-lunar cycle, spanning 2 months usually, with dates anywhere between January 1 through March first.

In 2018, this first 2-3 month period of time spans an unusually powerful time. January alone includes: 2 Full Moons (a Super Moon and a Blue Moon- in January!), and a Lunar eclipse. Celebrating over a 2 moon cycle provides 2 waning moon cycles for ample time for release rituals, and 2 waxing moon cycles for inviting and drawing abundance- all between the most powerful moons of the year. Why not take advantage of this kind of planetary power?  I will cover more of this in the coming weeks.     – Tara Linda

And why January 1st anyway?  Here are some historical bits that make the choice of demarcating a new year on any give day, a bit random:

As I’ve mentioned elsewhere on this blog, It feels right, in body and spirit, to give ourselves more time; to let ourselves celebrate the end of one cycle and the start of another over many moons, or at least for several weeks.  Those with purely Pagan leanings often get started early; a new year wheel begins for them on the Winter Solstice of the previous year- in December.

Though we all have to switch out our paper calendars on January 1, starting our New Year celebrations from the first day after the Lunar Moon (1/16) of January, today – through the 2nd Lunar moon of  February (2/17), really makes sense.  It gives us more meaningful time to release and plan. And we have the example of millions of people across Tibet, Nepal, India, Mongolia, and China doing the same!

Let’s relate all this to our Gregorian system; on January 1, it has begun to sink in for all of us: a new cycle is coming. Immediately before this- the holidaze! Maybe you were lucky enough to get in a vacation, some travel, and hopeful much needed downtime. Now you can begin to get more serious about the whole idea of release, planning, inviting, and making full transitions; we are all hopefully better rested in the darkest, coldest time of the year.  I don’t know about you- but it takes me weeks to juggle the holidays, the new year harvest- to journal and ponder about previous year events, mark up a new calendar revamp my business plan, and then to plan personal and abundance rituals around what I want to create?? Eeeeesh!!!  The January 1st date just makes me feel angst: a rushed anxiety. There is never enough time.

And so I don’t try based on the Gregorian system. Now, I gladly give myself more time by honoring a year not only based on a Soli-Lunar calendar, but based on how many cycles of Release (dark moon) and Abundance Attracting (waxing moon) I need.  So this year- I started rituals before, on and after the full moon of January 1- because it was a Super moon. And I will be conducting New Year rituals of many kinds, until March 1. I’ll be talking more about what this all means in the coming posts; how we can all match our rituals to changes in the elements, and lunar and planetary changes – all as they reflect naturally in our lives.

For now– here again, are a few ideas for celebrating Your Lunar New Year generally, starting today, via a few smudging rituals- for Release of the Old, and inviting-in of the New using Sacred sages and plants.

1. Out with the Old: Juniper, Cedar, Cypress are used all over the world to cleanse away old energies; to deep cleanse, and renew. You can burn loose leaf juniper and berries on charcoal, or “smudge” bundles; wands of Cedar or Juniper. The evergreens are strong, so I recommend starting small and burn or offer over several days, especially

if there has been long-term illness, negativity, or persistent malaise. You can find individual bundles in my shop webstore or on Etsy, Purify- a 4-pack of evergreens and sages.

2. Refresh with Sweetgrass:  (Sweet Grass or Sweetgrass). Not only is Sweetgrass the great purifier- to clear out old malaise and bad spirits, but it is the epit

ome of fresh and sweet- inviting joy and good health and abundance. Every year I hang a new braid of fragrant North American Sweet Grass in my car, and another near or at the threshold of my front door. Sweet Grass is such a wonderful Plant Spirit filled with sweet blessings. It has a spicy vanilla-esque scent and does not have to be burned to be enjoyed. Nearly all North American Native Tribes have stories about how the good Spirits cannot resist the scent and will always favor those who offer it. Sweet Grass invites goodness completely, and is my favorite plant spirit to offer in gratitude. Find sweetgrass here.

3. Crumble Old Smudge Bundles outside: If you recharge your bundles energetically, setting new intentions as you need to- then this is an Optional  or even unnecessary practice. But if you have used one bundle all year before (large bundles can last awhile) for one purpose, and if you feel that you are in a different place or situation now, don’t throw it away- crumble up old herb bundles and offer them back to the earth. Earth Mother will appreciate an offering gift, and this is also a symbolic way of ridding of the old and starting fresh. You can also burn old smudge bundles in a fire place or campfire (safely of course ;).

4. Dedicate a Seasonal Smudge Blend or Bundle to the New Year: To mark the New year; you can simply set new intentions for any bundles that you now have. Call aloud during your ritual- all you plan to release. Invite in- all you plan to create and attract.

This year is my first year to sell in my shops- a NEW Seasonal New Year’s Smudge Bundle, blessed by the January Super moon. It is the first time I am able to offer this publicly because the harvest was so good!! I can share now! And I am so happy with it; I hope you will be too.

* This Lunar New Year bundle is a special Limited run, Large Smudge bundle made by myself and another California sage grower. It holds wild harvested Blue Shasta sage from the north, mixed with my own grown Black sage and Bee Sages.

I bundle it all with Sweetgrass (excellent for setting New Year’s Intentions). It is made over 2 weeks, with seasonally grown and harvested Plant Spirits, starting with the Super moon!!

There are so many rituals around the world for cleansing, purification, and renewal!  Let me know about your New Year’s rituals with Sacred plants in comments to this post. 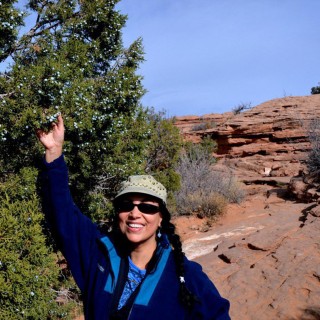 Biologist and LadyBoss at Sacred Land Sage. I grow Local California sages and craft Ceremonial sage blends for your rituals. We honor and enjoy all traditions with Sacred Plants around the world. Ceremony and ritual keep us connected to the Sacred for well-being, cleansing, and balance. My passion is planting Native Sage gardens making feather Smudge Fans, and helping clients craft their own rituals for change and personal healing. Visit us at: SacredLandSage.com